“At work I've got a cisco 3750 switch and few end devices which of course are company proprietary, connected to this switch in a separate VLAN. Now these end devices generate dhcp traffic "request" and is being propagated across all the sites where these devices are connected.

Now I've been reading stuff about dhcp snooping features which is great but in this instance these end devices don't have a DHCP server. In this scenario all these end end devices have got static ip addresses allocated.
Also my senior engineer being very narrow minded wants me to implement this change only on the interface level and not on the configuration level.
Can someone please confirm if I can just only enable "ip dhcp snooping trust" on the interface level which i believe will stop the dhcp traffic?”

The above question is about DHCP snoopingconfiguration. Here we will list some related tech tips and examples to give a response.

Every example in the response post has been tested in a lab environment with a Cisco 3550, Infoblox DHCP servers, a Netgear router as a "rogue" dhcp server, and a MacBook Pro as a client. The 3550 is configured with ip routing and a layer 3 interface on the subnet where the DHCP servers are located (10.0.10.0/24). VLAN 20 has been created on the 3550 with an interface ip address of 10.0.20.254/24. All the DHCP server configuration and helper addresses were tested and working prior to implementing DHCP snooping to eliminate any doubt as to whether the DHCP snooping configuration is working or not. So, let's get started.

For DHCP snooping to work, you have to enable it globally. That is done with the following global configuration command:
Switch(config)#ip dhcp snooping

You also have to tell the switch which VLANs to monitor. In a production environment, this would be the client VLANs, not a transit VLAN that leads to the rest of the network. This is done with the following command:
Switch(config)#ip dhcp snooping vlan 20

20
DHCP snooping is configured on the following L3 Interfaces:

If you have a DHCP server plugged into a switch with DHCP snooping enabled, or if you have a layer 2 LAN port connected to an upstream switch where the DHCP server resides, you'll have to trust that port. To do this, enter the following command in interface configuration mode:
Switch(config-if)#ip dhcp snooping trust
Any DHCP responses that come from an untrusted port (all the other ports) will simply be dropped without any notification. To test this out, after this was all configured and working, I connected a Netgear router with DHCP enabled into another VLAN 20 access port on the 3550. I forced a DHCP request to be sent out by the client and nothing happened. No log messages or warnings, nothing. Just to be sure the rogue DHCP server was working; I disabled snooping and unplugged the 3550 uplink to the production network. The client received a 192.168.1.2 ip address immediately. I released the IP, reconfigured snooping and tested again. The client received an IP from the authorized DHCP server and nothing happened with the fake DHCP server port.

I wish the switch was smart enough to put the switch-port connected to the rogue DHCP server into err-disable mode, but at least it stops the unauthorized DHCP server from actually handing out IP leases.

One final thought. If you are rolling this out into production, be sure to do so during a change window and test a client DHCP request with ipconfig /release and ipconfig /renew to be sure it can get an IP address and it shows up in the binding table.

Configure a Cisco Router to be a Frame Relay Switch

If you are studying for the TSHOOT exam, it is a good idea to familiarize yourself with the topology. I've been working on creating a lab that mocks the TSHOOT topology and it has forced me to recall how to setup a Cisco router to act like a Frame Relay switch. 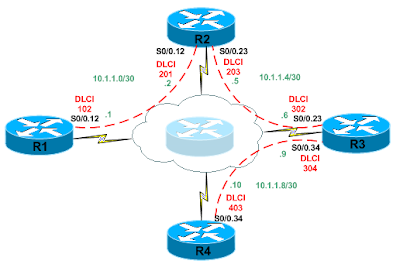 More Cisco Tech Tips:
How to Configure Cisco Routers as FrameRelay Switch (FRS)?
3 WAN Protocols: HDLC, PPP, and Frame-RelayYou Should Know
How to Troubleshoot OSPFv3 Frame-Relay?
Posted by Betsyyu at 2:59 AM 1 comment:


Cisco 881 is STILL HERE AFTER EoL and EoS Notices for Main Cisco 800 Series Items. The Cisco 880 Series is ideally suited for deployment in a small office or in a small office that is part of a large network, most often with a secure VPN connection.

These types of offices can include the following:

• Small remote office: The Cisco 880 Series can connect users in a small remote office, such as an insurance, lawyer, or sales office. When connecting to the main office, VPN encryption and integrated security such as firewall and intrusion prevention protect the network at the perimeter. The Cisco 880 with the Cisco Unified Border Element Series can also support connection to SIP trunking voice-over-IP (VoIP) services provided by the service provider. Additionally, IT managers can centrally manage the remote site to quickly troubleshoot any network problems. For added reliability, customers can also use the integrated 3G or ISDN backup or connect through an external modem if the primary broadband link fails. Integrated secure unified WLAN connectivity simplifies the deployment and management devices at the remote site. Redundant WAN links offer business continuity, enabling nondisruptive business operation.
• Virtual office: The Cisco 880 Series is ideal for corporate teleworkers who have a mix of broadband connection types such as DSL, 3G, and Metro Ethernet. The Cisco 880 Voice gateway and SRST Series provides a secure virtual office with all the collaborative services such as data, voice, and fax services. SRST helps ensure voice services are operational in case of WAN link failure, and redundant WAN links help ensure business continuity. QoS features in the Cisco 880 Series allow for connection of an IP or analog phone to the router, giving voice traffic precedence over data applications. Integrated WLAN support in the Cisco 880 Series helps ensure that if wireless connectivity is used it is secure. (Refer to the Cisco Virtual Office Solution, http://www.cisco.com/go/cvo, for more information.)
• Remote call-center agent: Similar to teleworking applications, this solution extends the Cisco IP Contact Center solution for telephone call-center agents to remote sites. With a high-quality, secure connection through the Cisco 880 Series, call-center agents can be dispersed away from costly call-center facilities while maintaining secure and productive voice and data access in their homes. SRST and business-continuity solutions in the Cisco 880 Series provide reliability and continuous business operation. Alternatively, the remote call-center agent can be provided with SIP trunking service with service demarcation provided by Cisco Unified Border Element features and the central call center can forward calls to the remote call-center agent through the remote-office SIP trunk.
• Retail VPN: Retail stores migrating from dialup connections for point-of-sale transactions can use the Cisco 880 Series to take advantage of low-cost broadband access with the required security to comply with payment-card-industry (PCI) and other data security requirements. They can then add multiple devices and applications to the store network to take advantage of the increased bandwidth and also incorporate optional WLAN support to enable secure mobility and enhance productivity.
• Managed services: Service providers and value-added resellers can use the Cisco 880 Series as a platform to offer differentiated business-class security, voice, and WLAN services for small business customers. With built-in analog and digital voice ports and the ability to upgrade to a 5 user Cisco Unified Communications Manager Express IP PBX, service providers can now offer all the Unified communications benefits to small and medium businesses. The SIP trunking connectivity features of the Cisco 880 with Cisco Unified Border Element Series Router can provide the high-quality VoIP service needed through the service provider cloud.

Deployment Scenarios with A Cisco 880 Series 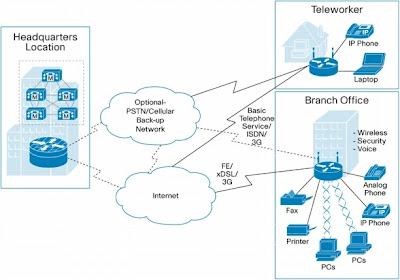 Here we list the main features and benefits of the Cisco 880 Series Integrated Services Routers.

A Summary of Cisco 880 Series Router
Cisco 880 Series Integrated Services Routers combine increased network performance with advanced security to allow small-office customers to get the most from their broadband connections for both data and voice applications. With models supporting different broadband technologies such as DSL, 3G, and Metro Ethernet, the Cisco 880 Series can be deployed at any small-office location. Optional integrated 802.11g/n wireless capabilities provide true business-class WAN and WLAN access in a single solution. With the Cisco 880 Series, enterprise IT managers and service providers can take advantage of a solution that can be easily set up at the remote site and can be centrally managed to reduce ongoing operational costs.