What are the Technical and Physical Differences between Ethernet Cables?

Which Ethernet cable do you should use? How do you know? In fact, Ethernet cables look the same, but they are different. So in the following short guide we take a look at the technical and physical differences between the Ethernet cables. 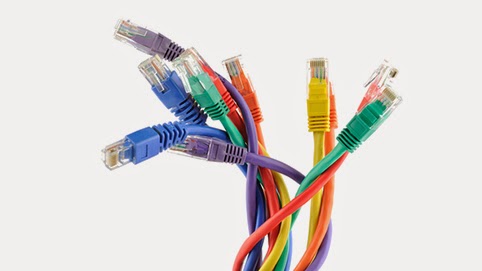 Ethernet cables are grouped into sequentially numbered categories (e.g. CAT5) based on different specifications; sometimes the category is updated with further clarification or testing standards (e.g. CAT5e, CAT6a). These categories are how we can easily know what type of cable we need for a specific application.

CAT Technical Differences
The difference in Ethernet cable specification is not as easy to see as physical changes; so let’s look at what each category does and does not support. Below is a chart for reference when picking cable for your application based on the standards for that category.

When you pick Ethernet cable, you can refer to the following table to check the standard of each category.

You may notice that as the category number gets higher, so does the speed and Mhz of the wire. This is not a coincidence, because each category brings more stringent testing for eliminating crosstalk (XT) and adding isolation between the wires.

Category 5 cable was revised in 2001, and mostly replaced with Category 5 Enhanced (CAT5e) cable which did not change anything physically in the cable, but instead applied more stringent testing standards for crosstalk. Category 6 was revised between 2002 with Category 6 Augmented (CAT6a) in 2008 that provided testing for 500 Mhz communication (compared to CAT6 250 Mhz). The higher communication frequency eliminated alien crosstalk (AXT) which allows for longer range at 10 Gb/s.

Physical Differences Between These Ethernet Cables
How does a physical cable eliminate interference and allow for faster speeds? It does it through wire twisting and isolation.

There are two main physical differences between CAT5 and CAT6 cables, the number of twists per cm in the wire, and sheath thickness.

Cable twisting length is not standardized but typically there are 1.5-2 twists per cm in CAT5 (e) and 2+ twists per cm in CAT6. Within a single cable, each colored pair will also have different twist lengths based on prime numbers so that no two twists ever align. The amount of twists per pair is usually unique for each cable manufacturer.

The nylon spline helps reduce crosstalk in the wire, with the thicker sheath protecting against Near End Crosstalk (NEXT) and Alien Crosstalk (AXT), which both occur more often as the frequency (Mhz) increases. In this picture below, the CAT5e sheath has the thinnest sheath versus CAT6 but it also was the only one with the nylon spline.

Shielded (FTP) vs. Unshielded (UTP)
Because all Ethernet cables are twisted, manufacturers use shielding to further protect the cable from interference. For example, Unshielded Twisted Pair (UTP) can easily be used for cables between your computer and the wall but you will want to use Foil Shielded Cable (FTP) for areas with high interference and running cables outdoors or inside walls.

There are different ways to shield an Ethernet cable, but typically it involves putting a shield around each pair of wire in the cable. This protects the pairs from crosstalk internally. Manufacturers can further protect cables from alien crosstalk with additional cable shielding beneath the sheath. The diagram below shows the different types of Ethernet shielding and the codes used to differentiate them. 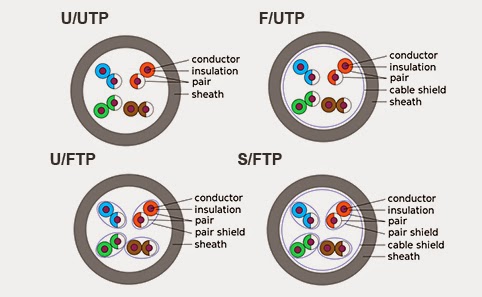 Key Differences: Stranded cable vs. Solid cable
Now you may be clear that which type of cable you should use. If you want to order Ethernet cables for connecting your routers, you can visit the leading Cisco supplier-router-switch.com for more details, or email their sales representatives.
http://www.router-switch.com/

Cat5e and Cat6 Cabling for More Bandwidth?CAT5 vs. CAT5e vs. CAT6
Cat5e vs. Cat6 Cables

How to Make Your Ethernet Crossover Cable?
CAT-5, CAT-5e,CAT-6, and CAT-7-General Questions
Posted by Betsyyu at 11:19 PM 3 comments:

You need a network module adapter to integrate existing network modules (NMs) or enhanced network modules NMEs) or extended voice modules (EVMs) into the service-module (SM) slot on the Cisco ISR G2 routers. Similarly, you need a PVDM adapter to insert existing packet voice digital modules (PVDM2s) into the PVDM3 slot of the Cisco 3900 or 2900 Series routers. You need one adapter for each module that needs to be plugged in; you can order it during system configuration in the Cisco Dynamic Configuration tool. You can also order these adapters as spares in order to insert any existing modules from original ISRs in use. Part numbers for the module adapters are listed in the following table.

Bundled Systems for Integrated Services Routers Generation 2
You can also order the Cisco ISR G2 portfolio products as prepackaged bundled systems for deploying advanced technologies such as security, unified communications, and application services in the branch office. Many of the bundled systems are being preserved from the first-generation ISRs and are being updated for the ISR G2 routers. 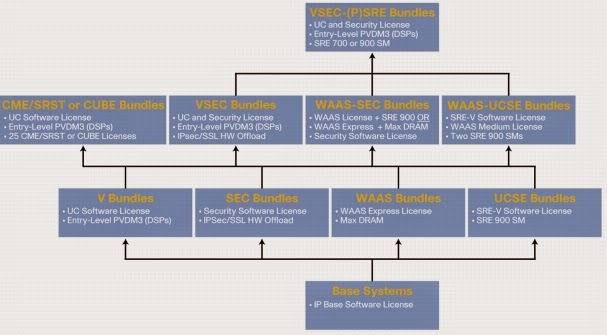 Security Bundles for Cisco 3900, 2900, and 1900 Series Routers-Include universalk9 Image and SEC License
* Customers can purchase either the Cisco SMARTnet Service (CON-SNT-XXX) or the Cisco Services for IPS (CON-SU1-XXX) which includes SMARTnet Service and Signature Updates for Intrusion Prevention System (IPS).

All the Unified Communications bundles on Cisco 3900 and 2900 Series routers include the new PVDM3, which has been optimized for concurrent voice and video support. The PVDM3 modules support all voice-gateway functions of earlier generations of PVDMs, and they add higher density and more processing power to support emerging rich-media applications.

The Table below lists the Cisco ISR G2 voice bundles for the Cisco 3900 and 2900 Series routers that come with entry-level PVDM3, UC technology license, and the unified communications features available for use. By default, these bundles ship with the universal Cisco IOS Software image that supports payload cryptography.

We also lists the Cisco ISR G2 CME-SRST bundles for the Cisco 3900 and 2900 Series routers that come with the entry-level PVDM3, UC technology license, and right-to-use licenses for 25 seats of Cisco Unified CME or SRST as follows.

The next Table lists the Cisco ISR G2 voice and video security bundles for the Cisco 3900 and 2900 Series routers that come with the entry-level PVDM3, Unified Communications, and Security technology license activated. By default, these bundles ship with the universal Cisco IOS Software image that supports payload cryptography.

The Table we list below is the ISR G2 CUBE Bundles for the Cisco 3900 and 2900 Series routers that come with the entry-level PVDM3, Unified Communications and Security technology license activated and also right to use licenses for 25 sessions of CUBE. By default, these bundles will ship with the universal IOS image that supports payload cryptography.

Application Services (SRE) Bundles
The Cisco Services-Ready Engine modules are high-performance router blades for Cisco ISR G2 routers; they provide the capability to host Cisco, third-party, and custom applications. The modules have their own processors, storage, network interfaces, and memory that operate independently of the host router resources, helping ensure maximum concurrent routing and application performance.
The Cisco Services-Ready Engine modules support an on-demand deployment model that enables you to provision integrated services and branch-office applications on the modules at any time. This solution can help your organization reduce the cost of integrated services deployment, help ensure your network will be prepared for new services and versions, and help your organization quickly deploy new branch-office applications when and where they are needed.

SRE Bundles for Cisco 3900, 2900, and 1900 Series Routers-Include SRE Module
* Customers can purchase Cisco SMARTnet Service (CON-SNT-XXX) for technical support on SRE Bundles which covers the router and the modules including the `blank' SRE module. SASU Service is necessary for the application running on the SRE module if one is being purchased along with the bundle.

Cisco UCS Express is best suited for multisite organizations with centralized IT infrastructure that need to host applications locally in the branch office because of performance, survivability, or compliance reasons. It enables multiple virtual instances of Microsoft Windows Server to run on dedicated general-purpose x86 blades directly in the Cisco ISR G2 chassis. With Cisco UCS Express, multisite organizations can increase business agility, lower total cost of ownership (TCO), and get more value out of their branch-office infrastructure.

UCSE Bundles for Cisco 3900 and 2900 Series Routers
* Customers can purchase Cisco SMARTnet Service (CON-SNT-XXX) for technical support on UCSE Bundles which covers the router and the modules including the SRE module, and the SRE-V software.

Cisco Wide Area Application Services Bundles
Cisco Wide Area Application Services (WAAS) solutions for Cisco ISR platforms enable the distributed organization to implement application acceleration and WAN optimization with fast return on investment. There are two Cisco WAAS solutions for the Cisco 3900, 2900, and 1900 Series routers. One solution is hosted on the SRE modules (WAAS on SRE) and the other is integrated directly into Cisco IOS Software (WAAS Express).
Cisco WAAS on SRE provides full-feature WAN optimization and on-demand provisioning without a physical visit to the branch office, and it is hosted on a compact, energy-efficient module. Cisco WAAS Express is a cost-effective Cisco IOS Software-based WAN optimization solution that increases the amount of available bandwidth for small to midsize branch offices and remote locations, while accelerating TCP-based applications operating in a WAN environment.

WAAS Bundles for Cisco 3900 and 2900 Series Routers
* Customers can purchase Cisco SMARTnet Service (CON-SNT-XXX) for technical support on SRE Bundles which covers the router and the modules including the SRE module, and SRE-V software. SASU Service is necessary for WAAS running on the SRE.
For more information about how to order the Cisco 4451-X and its associated accessories and bundle offerings, please visit the ISR 4451-X Ordering Guide.